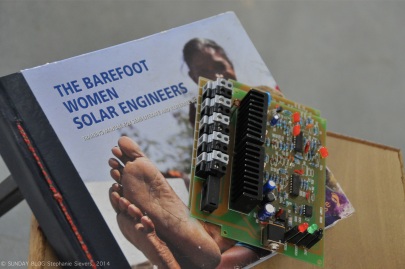 How to built solar cells without speaking the same language

Meeting Bunker Roy at his office

After graduating from an elite university in India, a man called Bunker Roy, did not start one of the many careers waiting for him, but started working with the poorest in the villages of India, to understand their needs.

In 1972, Bunker Roy started a college, called Barefoot College to educate the poor. What the poor thought was important would be reflected in the college. The college would accept cop-outs, wash-outs or dropouts willing to  work with their hands and skilled to support the community.

Bunker Roy changed the way people look at professionals. You are not necessarily a professional if you have a certificate, but when you know how to actually create something. So he started to educate illiterate people how to become an architect, a dentist or a solar engineer.

One of his projects is to teach grandmothers from all over the world how to build solar panels at a 6 month workshop at his Barefoot College. After the workshop the grannies go back to their villages, the villages get solar cells sponsored by the Indian government and the grannies will be the solar engineers capable of repairing. It’s such a disruptive experience and it’s breathtaking to see the strength of these grandmothers. They have usually never ever left their country and never met anyone outside their village. They dare to leave their village for 6 months, get on a plane to a country they might have never heard about, with a language they don’t understand to become a solar engineer. Change is about education, yet education is not only about certificates, but about the things you are capable of doing.

A different very smart project he started are the Barefoot Night Schools. Since the kids have to support their parents in the fields during day time, there is usually no way to go to school. He tackled this problem with Night Schools, where over 75,000 children were educated until today after dark – for sure with the support of solar light. At these schools kids are tought about democracy, citizenship, how to measure land, what to do if you’re arrested or what to do if your animal is sick. To help the kids understand society he started a Kids Parliament which would elect a Prime Minister. The Prime Minister is in charge of monitoring and supervising 150 schools for 7,000 children. The Prime Minister would write a postcard to Bunker Roy in case he or she could not solve a problem by himself or herself. It was one of these postcards, which resulted in a teacher’s lay off, since he did not come to school regularly.

Bunker Roy is an incredibly smart man with disruptive ideas and the passion and courage to start something different. In 2010 he was selected as one of the 100 most influential personalities by Time Magazine for his work in educating illiterate and semi literate rural Indians. I highly recommend to take 18 minutes of your time to follow his ideas and achievements in changing mindsets with Barefoot College listening to his TED talk below.

Bunker Roy at TED: Learning from a barefoot movement

News, Sports, Weather, Traffic and the Best of SF

Sharing my insights on personal and professional development.